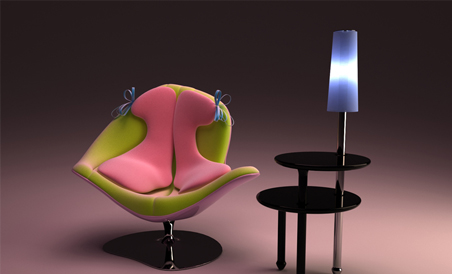 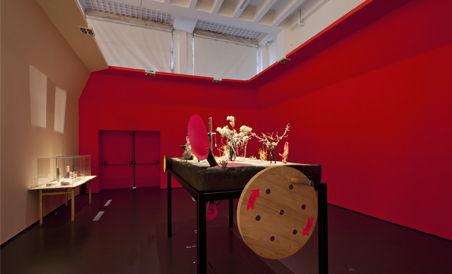 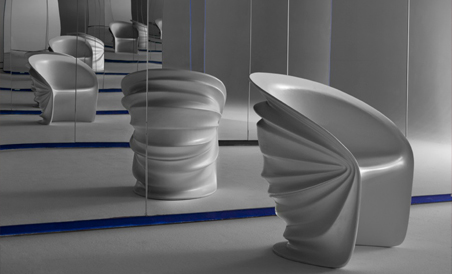 Casa Trussardi's setting, constantly hovering between contemporary art and Sixteenth/Seventeeth-century virtuous classicisms, is revisited by the genius of Italo Rota and his Rooms Show, part of his Domestic Cosmologies installment. Outside the building is set the huge, blinding white horn, while on the inside stands the huge Kama table which arrived in Bergamo directly from the Triennale. The Modesty Veiled chair, with its Dryad head and plastic and sinuous lines, pairs with the famous Origine du monde table by Meritalia.

Born in Milan in 1953, he graduated in Architecture at the Politecnico of Milan. At the end of the Eighties, and having won the competition for the interior spaces of the Musèe d’Orsay, he moved to Paris and signed the renovation of the Museum of Modern Art at the Pompidou Centre with Gae Aulenti. He then worked on the new halls of the French School at the Cour Carrè of the Louvre and at the restructuring of Nantes city center. In 1996 Rota returned to Milan and, two years later, he opened his architecture firm Italo Rota & Partners. The firm is extremely rich in shapes, colors, materials applied to subjects variable in terms of scale and type: from museums to places of worship, from casinos to auditoriums, to urban projects. Italo Rota divides his work between Italy and abroad: for Expo 2008 in Zaragoza, he realized the thematic pavilion Ciudades de Agua” and, the same year, he also designed the Cavalli Club in Florence. In 2009, the Hindu temple of Lord Hanuman in India was realized and, simultaneously, the designer gave life to the Cavalli Club and the Boscolo Exedra Hotel, respectively in Dubai and Milan. This multi-talented, multi-faceted designer is currently in the design phase of the Kuwaiti pavilion for Expo Milano 2015, of the Civic Museums of Reggio Emilia and of the industrial complex in Brembilla, Bergamo.