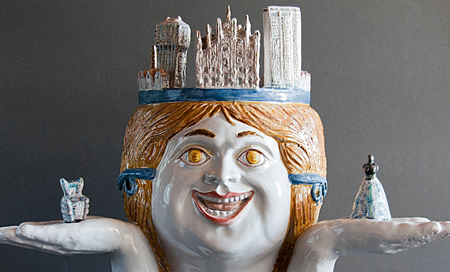 "Unity in diversity: Italy and its Regions"

Characters and identities united by the tradition of material culture. 20 planters in the form of a head, each representing one of the Italian regions, and a turreted head, symbol of Italy and synthesis of the diversity of the regions united in a single country. Designed by Ugo La Pietra and made by craftsmen/artists from Caltagirone.

Born in Bussi sul Tirino (Pescara) in 1938, Ugo La Pietra lives and works in Milan. He has always described himself as a researcher into visual arts and communication He communicates this research by means of numerous exhibitions in Italy and abroad. He has curated various shows at the Milan Triennale, Venice Biennale, Museum of Contemporary Art of Lyons (FR), FRAC Museum of Orlèans (FR), Museum of Ceramics of Faenza, Ragghianti Foundation of Lucca. He won the Compasso d’Oro Design Award in 1979. His experiences in the world of architecture and design have led him to develop themes such as La casa telematica (The Telematic House) at MoMA, New York, 1972  Milan Trade Fair, 1982, Rapporto tra Spazio reale e Spazio virtuale (Relationship between Real Space and Virtual Space) at the Milan Triennale 1979, 1992, La casa neoeclettica (The Neoeclectic House) at Abitare il Tempo, 1990, and Cultura Balneare (Bathing Culture) at the Centro Culturale Cattolica, 1985/95). He has always supported, with works, objects and documents (he was director of the magazines IN, Progettare Inpiù, Fascicolo, Area, Abitare con Arte, Artigianato), territorial design, which can be contrasted with internationalist design.