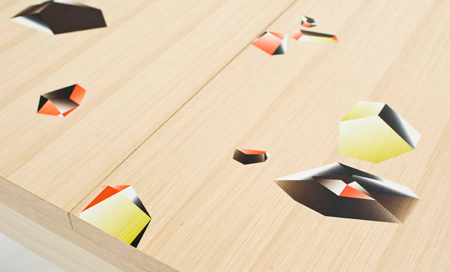 Painting developed into design objects: Villa Grismondi Finardi d'Amico is hosting three tables by Marcello Jori, recently manufactured by Moroso, which are designed to be opened and reveal their treasure. A deposit of crystals inside the Ali Baba table, a forest for the Avalon table, and other treasures in the form of constellations in Sherazad.

Born in Merano (BZ) in 1951, Marcello Jori lives and works between Bologna and Milan. He is a key figure on the Italian art scene and plays a major role of contemporary relevance in defining modern eclecticism. He has participated in three Venice Biennale exhibitions, the Paris Biennale, and two Rome Quadriennale exhibitions. . His works range from comic-strip art to writing, illustration, photography and painting, and they have been exhibited in shows and events at museums, foundations and art galleries throughout the world. He was one of the founders of the Nuovo Fumetto Italiano comic-strip style and for years has been developing an ambitious project entitled the Wonderful City, a city for the most important artists on the international scene. In the nineties he took part in the Psicho exhibition and an important four-man show together with Dan Flavin, Sol LeWitt and James Croak at Kunst Hall in New York. He also held a one-man show at the Boston Art Institute and explored the infinite levels of artistic communication by creating the stage set for Vasco Rossi’s historical Rock sotto l’assedio (Rock under seige) concert, held at the San Siro stadium in Milan in 1995: a painted city of 20 metres by 70. In 2000 he published the novel “Nonna Picassa“, with Mondadori, and presented Predicazioni (books illustrated and designed to be read aloud), later rediscovering comic strips and painting through new expressive media, as seen by his collaboration with important Italian and design companies such as Alias and Moroso.