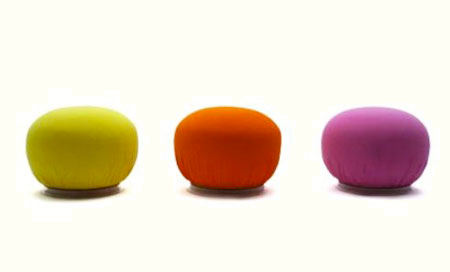 The inlaid floor evokes the design on demand of contemporary makers: a series of objects that interact with the creative hands of the open project, examples of open design, performing objects and 3D printed items that anticipate a new industrial history and a new story of design.

An atypical designer and an outsider on the international scene, Denis Santachiara was born in Campagnola (RE) and began his career creating works that straddled both art and design. He has exhibited at various events, including the Venice Biennale 1980, Documenta 8′ – Kassel, Milan Triennale 1982/84/86 /96 /2001/2004, Rome Quadriennale, Pac Milano 1999.
In 1984 he worked on the exhibition La Neomerce, the design of invention and artificial ecstasy (Milan Triennale and Pomipidou Centre, Paris), which became an international benchmark for a new performatory, techno-poetical, spectacular and ironic type of design. He introduced into design a new and unknown relationship with technology, involving small inventions and illusions created by using intangible forms such as animation, surprise and sensoriality.
He is the creator and curator of installations and one-man shows throughout the world (Lyon, Paris, Milan, Tokyo, Istanbul, Shanghai), as well as the organiser of museum projects, such as those at the MAMbo (Museum of Modern Art of Bologna).
Permanent collections of his works are hosted at, among other places, MOMA of New York, the National Museum of Modern Art of Tokyo, the Denver Art Museum, and the Vitra Museum of Philadelphia. He has designed for some of the world’s most prestigious international locations, ranging from the Charterhouse of Avignon to the Art Hotel of Dresden, and collaborated with all the most important Italian and international design brands (Vitra, Domodinamica, Bang&Olufsen, Fiat, Fontana Arta, La Murrina, Swatch, Guzzini).
Winner of the Compasso d’oro (Golden Compass) award in 1986, in 1999 he was awarded the Good Design Award by the Chicago Athenaeum Museum of Architecture and Design, in 2000 he won the Design World award in two sections, and in 2010 he received an award from the Accademia Italiana for promoting the image of Made in Italy throughout the world
He has held and holds courses and seminars in universities and institutions in different countries.