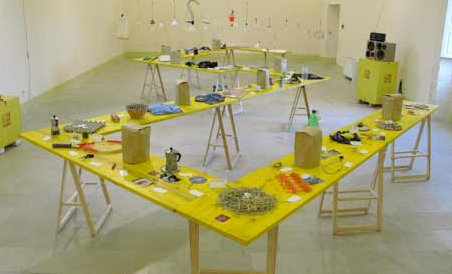 A project in progress, a traveling exhibition with more than 500 objects and structures that show the change of use of artifacts and parts of the territory. A visual dictionary in constant relation between "poetic capacity" and "technological capability". The innovative use of local resources to address the everyday needs with the instinctive ability of a child and the calculated planning of an engineer.

Born in 1969 in Bologna, Pario Perra is a relational artist, a designer and a researcher engaged in quite diversified disciplines such as art, sociology, anthropology, architecture, even geopolitics. Between 2000 and 2010 he exhibited his works, gave life to urban actions and coordinated workshops and projects in many cities around the world. At the same time, he lectured at the Faculty of Architecture of the University La Sapienza in Rome, at the Technical University of Delft, at the Milan Polytechnic and at the University of Denver in Colorado.
Pario Perra’s database, Low Cost Design, came to life in 2001: today, it contains over 7000 photographs that immortalize the transformation of objects and public space. It is a striking visual archive of examples of spontaneous creativity, created by the relationship between poetic skills and technological capabilities, intuitive skills, capacity for abstraction, event and error. In 2010 and 2011, Low Cost Design was turned into two books edited by Silvana Editoriale, and into a traveling exhibition with more than 500 objects and structures collected at the four corners of the world. The exhibition, constantly moving between Italy and major European capitals, was inaugurated during the 51st edition of the Salone Internazionale del Mobile in Milan, held at the Fabbrica del Vapore: Low Cost Design is an interdisciplinary heritage where design is linked to social and human sciences.