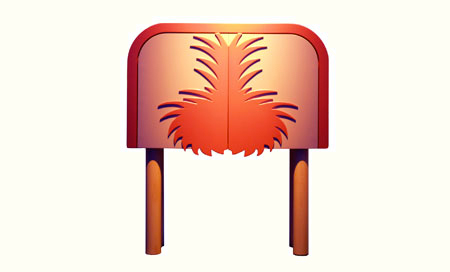 Mosaic pictures, sheet metal furniture, ceramic vases, as well as tables and chairs made up of zoomorphic symbols explore cosmic alchemies and the relationship between animal and man. Their colours and contrasts highlight the dialogue between the historic memory and new presences, among art and design.

Anna Gili was born in Orvieto. She’s interesting in material’s research to create communicative and symbolic objects. In her works she was influenced by Renaissance’s culture.
At the beginning of her career, she did art performance and installations, very important for her first objects as Cro vase 1985, and armchair Tonda 1991.
Anna Gili considers objects around us not impersonal, but she says that they participate at life, they are interactive and create connection between different cultures in the world.
Objects remind us not only to our life, but also the past.
The following firms are among its clients: Alessi, Salviati, Bisazza Mosaici, Dornbracht, Swatch, Ritzenhoff, Arzberg, Slamp, Cassina, Cappellini, Nicolis Cola Gioielli, TDK Japan.
Studio Gili also handles consultation and art direction for companies, offices, cultural agencies and associations in the field of design.