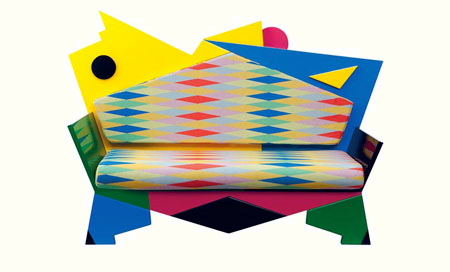 "Design on the edge"

A large Rug with objects placed in the centre of the Salone della Gerusalemme Liberata (Hall of Jerusalem Delivered), in the heart of Palazzo Moroni, safeguards and contains an interesting medley of symbolic objects, icons of existence, which are far removed from one another in terms of space and time, subject, and placement in the mind of the Master.

Alessandro Mendini was born in Milan. As a boy he lived in a town house designed by Piero Portaluppi, among captivating paintings by Savinio, Severini, Campigli, Morandi and many others, which were part of the collection of paintings belonging to his family. This visual environment was fundamental to his education. After graduating in architecture, he was strongly influenced by Rogers, Nizzoli and Gio Ponti.
In addition to designing, he is also interested in writing and theorising, and has edited a succession of magazines: “Casabella” (1970-1976), “Modo” (1977-1981) and “Domus” (1980-1985; 2010-2011). This work, conducted in parallel with his partnership in the Alchimia studio, with whom he has shared his entire adventure, introduced him to radical design and neo-modern architecture, and led him towards a calligraphic, colouristic, symbolic, romantic and complicated approach with the project. Since then, he has created a fairy-tale world of objects, furniture, prototypes, products, paintings, writings, interiors, installations and situations that are often interwoven, complex, controversial, paradoxical, ironic and literary. Since this time, he has also worked with various companies, even in the Far East, as an image and design consultant.
His work seems to have two souls: one solitary and introverted, the other open to group activity. In fact, he has created as many works alone as he has formed groups, with both unknown people and great designers and artists.
In 1989, in Milan, he opened the Atelier Mendini together with his brother, the architect Francesco Mendini.